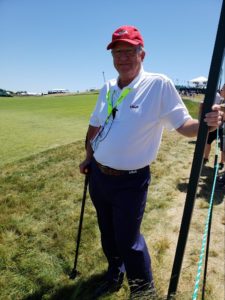 In March of 2017, Kim received the news that nobody wants to hear. He was diagnosed with sarcoma cancer, and the treatment would require the amputation of his left leg above the knee. A few months after the surgery, he found himself learning how to walk again at the age of 66.

Slow healing, combined with the frustrations of constantly adding and removing pads and socks in order to remain comfortable, forced Kim to continue to rely upon his crutches for mobility support. Frustrated by the ill-fitting prosthesis, he eventually quit trying to use his current prosthesis and opted instead to utilize crutches without a prosthesis. Although he abandoned his conventional socket, Kim was not prepared to give up on his dream of walking with a prosthesis.

Undeterred by his experience, Kim began to search for a better option. A Google search led him to the Infinite Socket™ TF, and he reached out to LIM Innovations® for more information. After speaking with a representative and completing the preliminary screening, he was hopeful that he had uncovered the solution to his socket woes. “This was the concept/design I wanted – open, lighter, and comfortable.”

Since receiving his Infinite Socket™ TF, Kim’s life has drastically improved.  “Now I am able to train and am learning to walk again. Without the socket pain, I have progressed to using just one Fortran crutch in just a few days, and I’m getting close to walking without the crutch! I can go more places and enjoy activities with my wife and friends, and traveling is now more comfortable.”

A golf rules official on both the local and national level, Kim is eager to resume playing the sport he loves. Because of his Infinite Socket™ TF, that goal is within sight. He is also looking forward to helping his wife around the house more and to living a life without pain.  Kim will soon be appointed by the USGA to a new Committee organized to conduct a new USGA national golf championship for the disabled. With his adjustable Infinite Socket™ TF, we know that he is up to the challenge.