I am in no way, shape, or form defined by the disorder I have, the limbs I do or do not have, or what I look like. I am defined by my heart and the actions I choose every day.

As the victim of a car accident in 2008, I was left with a disorder known as Reflex Sympathetic Dystrophy or Complex Regional Pain Syndrome. Through the course of a VERY long nine years I was in and out of the hospital more times than I ever like to imagine, and have had over 20 surgeries to aid this illness. I was in a wheelchair from 2008 to 2016, and underwent three years of ketamine treatments including a 5-day intensive ketamine treatment in Cleveland. In 2015 the disorder had nearly claimed my very existence. With a continuous IV drip, many strong antibiotics and medications, by April 2016 the infections had gone to the bone (Osteomyelitis) and was successfully killing me. It was the common consensus that my leg needed to go, so on April 28, 2016 at 4pm my left leg was taken, seven inches above the knee. I was kept in the hospital for three days then sent to a rehab facility to learn to deal with the amputation.

Rehabbing the body is more about rehabbing the mind; results will not happen until you are ready to push through hell to find heaven. I was placed in an inpatient rehab facility for about three weeks following my amputation, where my care was nothing but tremendous and a great help. While I was assisted in learning how to regain strength, keep flexibility and how to walk on a prosthetic, one huge area was neglected. No-one in the facility gave support in the psychological department. Nobody was there to help with the “why?, or how come?”, or any of the other Kubler-Ross stages of death and dying every amputee goes through. No matter how positive or hopeful an amputation may be, it is TRAUMATIC on all fronts. I left the facility blind to the truth of how you begin this new life that has been inevitably thrust upon you. Your body is weak, traumatized, and  your mind blind to what you are going to have to learn to hurdle before you can begin sprinting. Life after amputation is an alien existence, with obstacles you could not even imagine. The obvious impediments pertain directly to your missing limb; what is foreign are the small things you were accustomed to, yet have to learn to do differently.
Arriving home, I could not bare to look in a mirror. The concept of not seeing a part of me made me feel somehow incomplete; like a monster in my own skin. The anger that became a regular tenant in my heart felt comfortable. I had lost all empathy and while I did not feel sorry for myself, I felt broken in many ways. It felt as if everyone saw me like a deformed beast that would infect them if they did not stop looking at my missing limbs previous residence. I saw no empathy, only utter and complete horror. I stopped wanting to thrive and exist, and began to give up on my own life. One day sitting in my recliner I stared outside and watched a pair of beautiful yellow finches dance, with tears running down my face; I felt no one would ever see me as “normal” again. I leaned forward and saw that one of the finches had no foot yet was dancing, singing and appeared to be the epitome of joy and happiness. Being shown in such a beautiful way that life can be great again, the tears slowly transformed into tears of joy and gratitude. I no longer looked at people with two legs with anger but as a goal, my thoughts shifted to watching people’s gaits, when and how their knees bent ,what positions their feet were in, and when their knee broke into the next step. 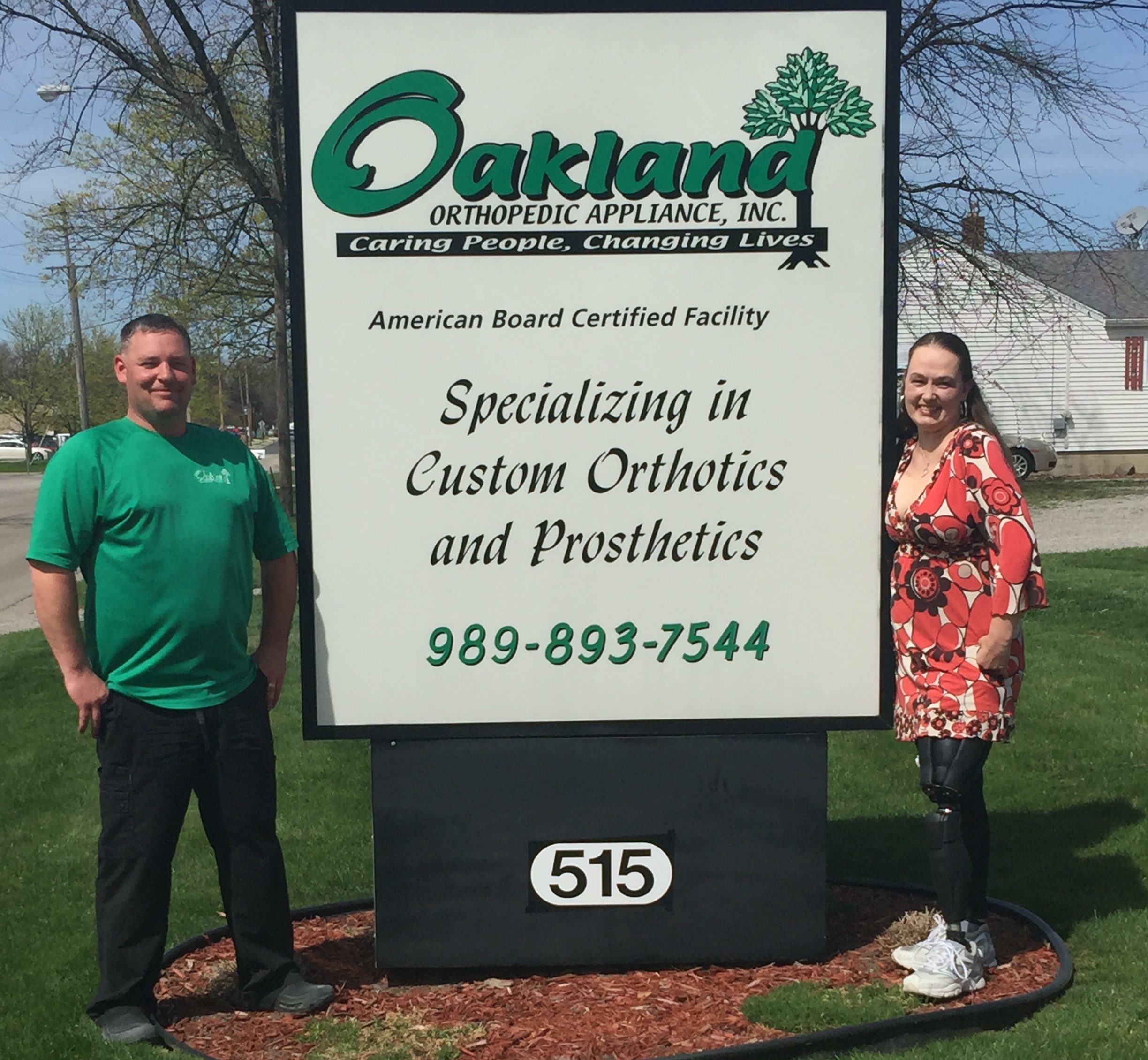 Over the next few weeks I was hell bent of mastering this new life! The socket I was given, a cup fitted at the limb was extremely uncomfortable, leaving me at times with bleeding sores and bruising up and down my residual limb. Two months later I was walking and ended up breaking my ankle. I was in a cast for nearly three months so rescinded to my wheelchair once again. As soon as the cast was removed I was fitted with my Infinite Socket by Oakland Orthopedic. Tears rolled down my face as the realization of the new ‘normal’ concept became so bright it was blinding. That day, about 45 minutes after I received the Infinite Socket, I walked half a mile unassisted. This may not seem much but please keep in mind I had been completely immobile for nearly 9 years. The muscles in my legs jumped to attention and walked like I had never stopped. I jammed out to Hamilton while walking the track at a local YMCA and before I knew it I had walked a half a mile with EASE! None of this would have been possible on my old cup fitting, it was painful and took the majority of my energy to not hurt myself further inside the cup itself.
Looking back now I am amazed at the concept of what I am achieving having only been up on a prosthetic for only 7 months. I AM A FORCE TO BE RECKONED WITH! Life has tried its hardest to end me so many times, and all I want is to be a person whose life can be used to help others achieve their own happiness and contentment. We are all given tasks and hurdles that seem like they will be too much or that it will be impossible to ever move past them. It is no-ones responsibility to find your joy, pride, contentment or drive, only yours.