Childhood should be spent climbing trees, playing hide and seek, exploring the neighborhood and building new friendships. For Andrew, this carefree world came to a crashing halt when he was diagnosed with a vascular malformation in his right leg at the age of seven.

Instead of youth sports and hanging out with friends, Andrew was shuffling between specialists and in and out of the operating room in a quest to treat his condition. Four years after diagnosis and after thoughtful research, he opted for an amputation.  The family was confident that the removal of Andrew’s impaired and painful biological limb would allow him to return to an active life.

He healed from the amputation and was quickly fit with a conventional socket. Mary, his mom, was optimistic that her son’s struggles were in the past. Utilizing his new prosthesis, she was excited about her son’s future.

Andrew began to forgo his prosthesis, a move that frustrated his Mom. One morning the prosthetic tension reached a boiling point, and Mary confronted her son about his aversion to the prosthesis. Finally he confided that he was struggling with the socket and couldn’t wear his prosthesis. 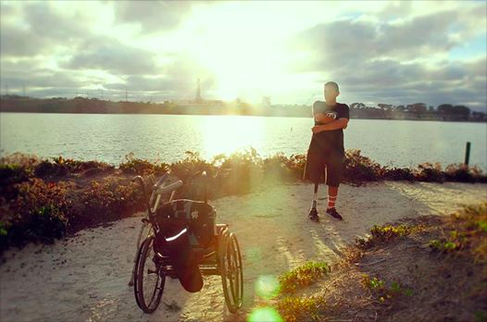 Mary was heartbroken when she heard her son’s discomfort confession. Before the amputation the family did their due diligence researching the surgery, the recovery and prosthetic components. Nothing prepared them for the possibility that Andrew could be disabled by the very device designed to restore mobility. “He just knew it hurt and wasn’t comfortable.  I wasn’t getting it. No one prepares you for what comes. No one prepares you what it is like trying to get a fit into a socket. We did all the research on the legs but nothing on the socket. The socket is the most important part.”

Refusing to allow her son to abandon prosthetic use, Mary doubled her research efforts making it her mission to find a solution. A friend introduced the family to LIM Innovations and suggested that they explore an adjustable socket. The exchange was life changing for Andrew.

After being fitted with an Infinite TF adjustable socket, Andrew experienced a comfortable socket for the first time in his amputee life.  “The minute he put it on and walked it was just incredible.  He immediately was different and never once has he avoided putting his leg on.”

Mary explained the difference she has seen in her son since he started using the Infinite TF socket. “He can go to a restaurant and not have to take his leg off. He could not sit down for more than 5 minutes without complaining.  He is comfortable so he can sit and not have any discomfort.  He never complains about it. He had to take it off in class and now he keeps it on all the time.  It is the most amazing socket on the planet. I have watched what it does. It changed his life.”

Mary refused to allow her son to give up on his prosthesis. She continued to research until she discovered the fully adjustable Infinite TF socket from LIM Innovations. She offered this message to others who are experiencing issues and discomfort with their conventional socket. “Educate yourself and don’t limit yourself to thinking that this is the best it can be. You have choices.”