In August’s blog, we catch up with Daniel Servantes, from San Antonio, Texas, who was fit with the Infinite Socket TF three months ago by Premier Prosthetics. After resigning to a wheelchair due to prosthetic discomfort, Daniel makes it clear that following the arrival of his adjustable socket, he has plenty of making up to do for lost time.

“Growing up I was extremely active, playing a variety of sports at a high level, in particular, baseball and racquetball. I will never forget the pride I felt when, in 1976, my Dad was able to pick up a copy of Sports Illustrated, with me, his son, promoting racketball on the front cover. In 1989, I suffered a meniscus tear to my left knee, on game point during a racquetball final 2-3 weeks before my daughter was born. I am lucky to report, I left on a high note and was able to win what was to be my last ever racketball point, to pick up the tournament trophy. Following the game, I went to the hospital to check on my injury, with the resulting outcome, “if you stay on the racquetball court, you will need a knee replacement in the next few years.” With the birth of my eldest daughter, it was an easy decision to give up the sport I loved. I have spent my professional years in the insurance industry, traveling the globe, picking up many fond memories along the way. In 1999, I had a knee replacement to help me keep up with my busy schedule, but after four years, the replacement came loose and had a second replacement. 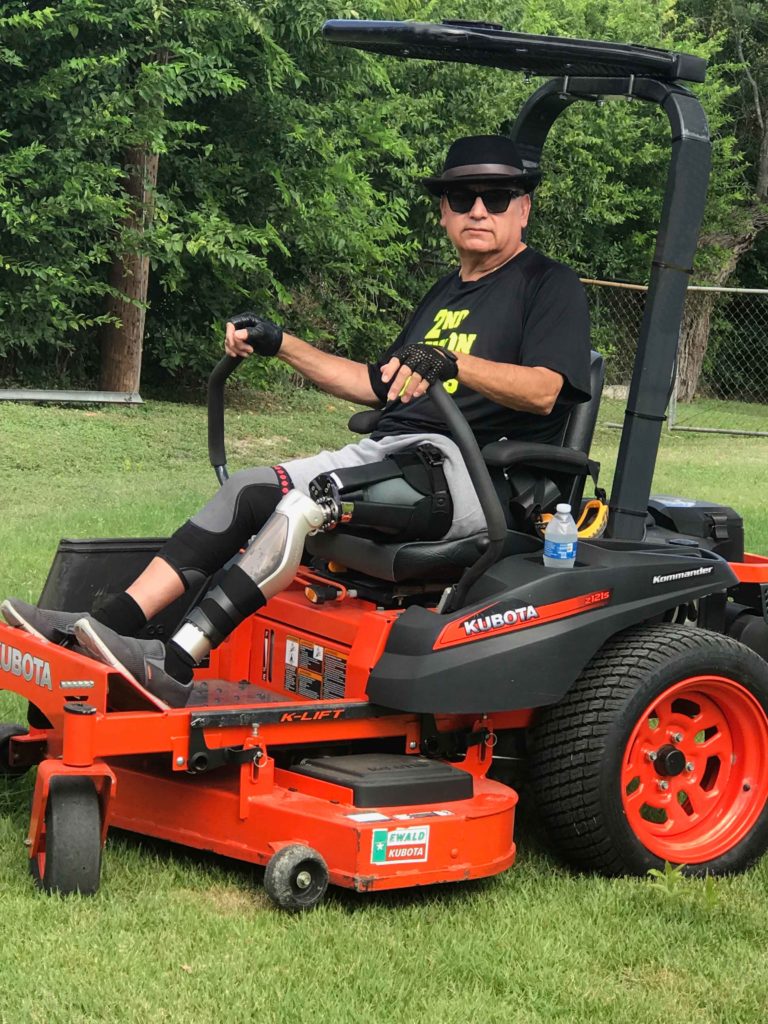 Upon leaving, I was given a large dose of antibiotics I was told to take for the rest of my life. After two years of increased dosage to offset the pain, walking became unbearable. I was carrying a dead limb at this point and was on business in Germany when they put me on a splint. I revisited the hospital, where they said I had picked up a staff infection, and suggested I continue with stronger medication. After 2.5 years, and 5 doctor’s opinions, none of which wanted to touch me, I was referred to a cancer specialist; one of the best in Europe. My femur had eradicated, and his entire staff was amazed I was even walking. They were the first to suggest amputation; a scary thought, but one I would never look back upon given the pain I was in at the time. If I could point to one thing I have learned and would recommend to anyone from the process I’ve been through, it would be to always get a second opinion.

On June 12, 2018, I underwent a transfemoral amputation on my left leg. Prior, the PA had asked what was most important to me, and I said my grandson, a thought which I cling onto to this day. The removal of my limb was the happiest day of my life. My amputation was very successful, and during rehabilitation, I found out about the Amputee Coalition; a great resource for any new amputee, and booked a ticket to their annual conference in Tucson, with stitches still in my limb. I attended a lot of the classes, on wound care, proprioception, technologies, and felt confident of my progress moving forward. I would recommend this event to any amputee.

I receive my care from Premier Prosthetics and Orthotics in San Antonio, who are conveniently located 100 yards across from my house. Upon hearing about my amputation, I was put in touch with a peer volunteer and was given the time to talk through my ambitions and goals with their staff. Rick Ramos and his team have always put my patient needs first. I just text him and he has someone from the office call that same day to answer any concerns. The peer visitation is a great method to learn the ropes of being a new amputee, and this year I was able to get my license. My first peer visit was a guy who didn’t like wearing the prosthetic device, and was in a wheelchair; a similar scenario to my first-year post-amputation. It’s a great feeling giving back to the community you are now a part of and one that I look forward to continuing with in the future.

I was fit with the Infinite Socket two months ago but have long shown a great desire to get one after previously being fitted with two different types of sockets. It’s as close to feeling like I have my leg back. The socket stability allows me to stand comfortably due to the way the lateral paddle holds up against my hip. The comfort encourages me to stand for long periods due to the socket’s design to encompass the entire residual limb. The way the struts are placed enables the distribution of my weight evenly between the four while allowing my limb to breathe. Being able to walk without a cane is a huge plus for me and I’m making progress to stride a little longer and a little straighter with each passing day. When I drive, I don’t wear the socket, preferring to take it with me in the car, but the beauty lies in the fact that it takes about 12 seconds to put on, something I never shy away from demonstrating to intrigued onlookers. I am getting close to walking around nine hours a day regularly after spending a year in a wheelchair, ‘staring at belly buttons’ as I like to say.

It’s fair to say that I have a lot of catching up on life to do, and am currently working on renovating my daughter’s house. I have some more landscaping to complete in the front, so am using my newest purchase, a golf cart, to move around the garden and pot the sprinklers. That being said, I’ve made huge strides on the interior decorating, including redesigning the stairwell. I have recently had the golf swing mode added to my Ottobock C-Leg to reignite my love for golf, a sport that keeps tests both your physical and mental attributes. My long term goal is to go back to work within the next 2-3 years and continue to build relationships with my clients that I have established for the past 30 years. My son now coaches little league for his son, just as I did for him, and my father did for me beforehand. It’s amazing how life comes full circle, and I can proudly watch my family’s generations continue to shine.” 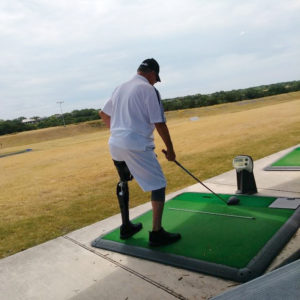 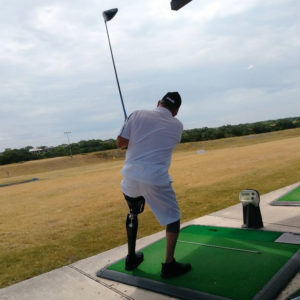